Epic Proportions - A Get Back into the Epic 40.000 Universe ArmyChallenge™

The 6 mm scale representation of the Warhammer 40.000 universe has had multiple names over the years. It has been called Adeptus Titanicus, Space Marine, Epic 40.000 and Epic Armageddon. I have only ever played the Epic Armageddon game, but I actually much prefer Epic 40.000 as the title.

Despite having never played the game, I have always been drawn to the scenographics and pang-colours of late Space Marine 2nd edition and Epic Titan Legions battle reports. I have been through many iterations of colour schemes over the years (some you can even find on this blog) for my Imperial Guard, my Orks, my Chaos, my Space Marines. But I never really nailed it.

I think for a long period I was drawn to "realism" in the presentation of Epic on the board. But lately I must say that I get the warmest feeling when watching the pictures of colourful brightly coloured armie in White Dwarf. The small pops of red and blue on the battle field suits the Epic figures better than the muddy and realistic greens and browns.

This post is somewhat of a reboot of my efforts in Epic 40.000. I intend to go all in to this again, and I think I will focus on NetEpic Gold this time around. I really like the army cards of this edition, even though I never played 2nd edition when it was around.

Additionally I have also read that this edition is good if you want to employ titans on the field. One of my main gripes with the otherwise really cool Armageddon edition, is that I find taking titans is more or useless compared to more activations and more small troops. I'm sure there's lots of people who'd argue against this, but this is my personal impression though.

So. To get things started I want to make a 4000 pts Ork force and let it face off againt a 4000 pts Space Wolves force.

I also want to create a variety of terrain to go with the forces, fitting with my current Rogue Trader setting of Melnibonea - a backwater mediaval post apocalypse/aggricultural world.

First I have selected the Orks: 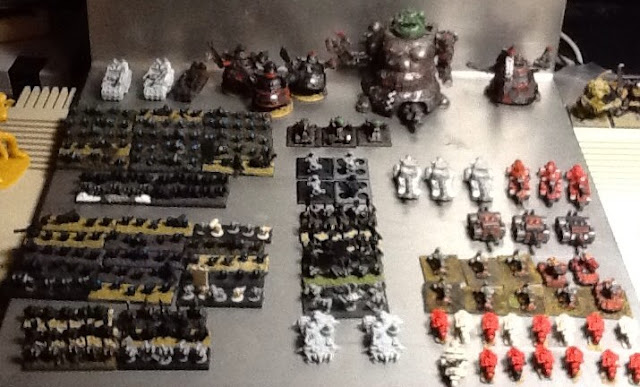 The plan is to paint roughly 500-1000 points per month and then post here and hence the army should be done in 4-6 months. Then I will start the Space Wolves. Hopefully by Christmas, I will be having cool games of Epic 40.000 in my hobby room!

The rules for NetEpic Gold are available here: https://netepicgold.weebly.com/netepic.html

Joining me (if not in practicality then in spirit) on the challenge is also:

and T.F. Riley from https://chainflailandlead.blogspot.com/

Floyd will be adding and revamping his army here https://1stlegionchronicles.blogspot.com/

Duz Holger's is supporting the cause with terrain building https://duzholgers.blogspot.com

I will make a sum up of our efforts here on the blog once a month.

Anyone else wishing to join in can simply write a comment here and I'll link to their blog.
Indsendt af Dr. The Viking kl. Thursday, April 09, 2020